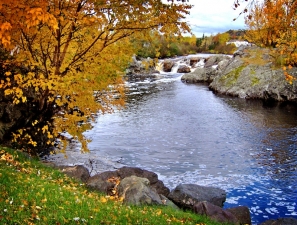 The Rotary Trail is unique as urban trails go. It starts in commercial surroundings at the Memorial Drive Bridge over the mouth of the Lower Shoal Harbour River where it tumbles over its last fall before reaching the sea.

For the first 10 minutes, the trail hugs the river, skirting residential and recreational areas until you come to a bridge just above the confluence with Dark Hole Brook. After crossing the bridge, you enter a Boreal Forest as remote as island’s elusive interior. From there on, the trail follows the brook mapping out three links of a chain through a valley almost leading to the Trans Canada Highway. Each link brings you across the brook and connects with the former Newfoundland Railway road bed which forms the other side of the chain.

The successive links offer hikers a variety of routes without having to retrace their steps. The last link spans the brook where it has cut an impressive little gorge in the bedrock. The degree of difficulty is low along both the Lower Shoal Harbour River and Dark Hole Brook. The railway, which is now Newfoundland’s portion of the Trans Canada Trail System, is higher up the valley wall but strategically placed steps render the short climb easy.

Nature lovers have a rare opportunity to view a variety of wildlife in its natural environment all along the trail despite being so close to human habitation.

This project was initiated by the Rotary Club of Clarenville. 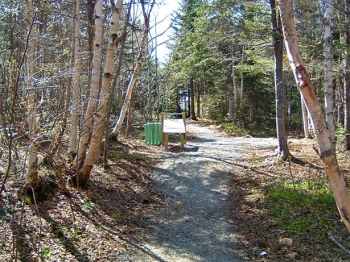 As if it were a metaphor for a healthy lifestyle, the Wellness Trail has no designated beginning or end. You can start at the High School or the Town Hall or even use it as a bridge between the Rotary Trail and the Bare Mountain Trail. It basically forms a cross pattern tending roughly towards four major compass points.

Its degree of difficulty is really up to the user. It is a pleasant wooded walk up and down dale dotted with exercise stations for those seeking a more strenuous workout. 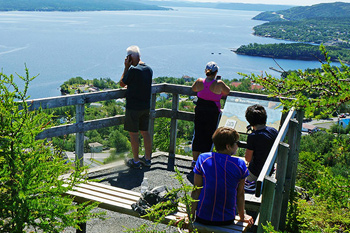 The Bare Mountain Trail is a three kilometer loop through lush forests punctuated by rocky promontories. It starts and ends at the Manitoba Professional Building on Manitoba Drive.

As its name implies, it is hill walking at its best but it is not hill climbing. The route follows contour lines wherever it can to make the ascent as easy as possible. The steeper parts are assisted by stairs while the rest stops give impressive views. The best view of all is at the summit which is 157.2 meters above sea level. Don’t let this figure deter you as the start of the trail is at least half that height. From there, you have a clear view to all points of the compass.

Inland you can see the White Hills Ski Resort and the impressive wooded hills that form the shoulders of the Shoal Harbour River Valley.

To the North is Shoal Harbour itself, stretching on until it ends at the clearly visible causeway to Random Island. The Island fills the eastern horizon and you can even see parts of Smith Sound on the far side. In the foreground, the Northwest Arm of Random Sound spreads southward to meet up with the Southwest Arm and together meander on to Trinity Bay.

All of Clarenville, new and old is spread out at your feet. It truly is a magnificent vista and well worth the effort. Continuing beyond the summit, you descend some steps to a man-made duck pond whose residents are always eager to greet travelers. From there, the route wanders back down to the beginning through fir and spruce woods that make every day smell like Christmas! 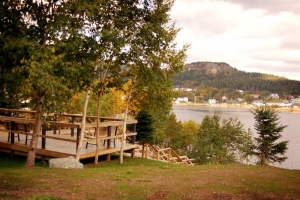 The Shoal Harbour Causeway Walking Trail was constructed in the summer of 2006 with the development of a trail and pedestrian bridge parallel to the causeway in Shoal Harbour. The Shoal Harbour Trail boasts two viewing decks overlooking random Sound.

An asphalt walking trail continues from the pedestrian bridge to Hunts Hill. Picnic tables, benches, flower boxes and hanging baskets have been placed along the loop. A trail joining Shoal Harbour trail into the Bare Mountain Trail system has been developed.